A gingerbread crocodile puts a shine on even the dullest afternoon. 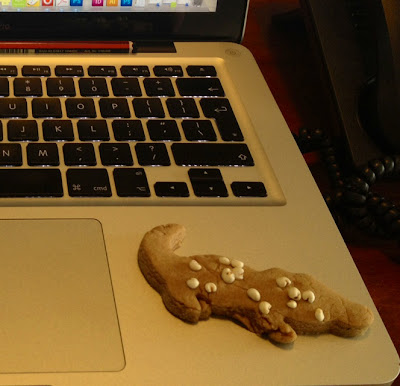 Email ThisBlogThis!Share to TwitterShare to FacebookShare to Pinterest
Labels: object of affection

Fresh Air, With a Side of Sinus-Clearing

The park I walk through on my way to work has been having some tree surgery.  In consequence there are piles of branches, leaves and wood chips on the edges of the paths.

As a further consequence, when you take a deep breath (as I did this morning, which was a perfect sunny, crisp and clear Autumn day), you inhale eucalyptus oil.  It's like inhaling one of those eucalyptus throat pastilles, except with the bonus of lovely scenery and fresh air and sunshine. 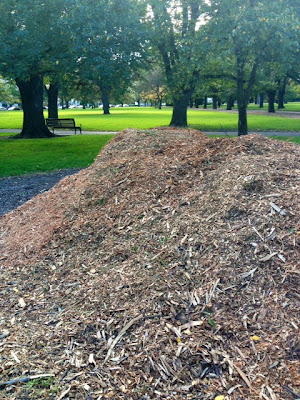 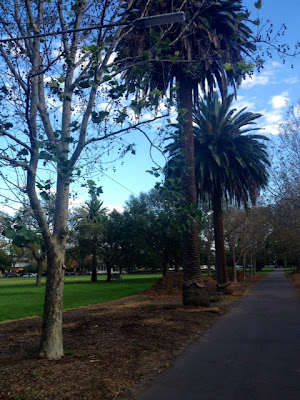 Whatever else I might be reading, I always like to have a Lady Traveller travelogue on the go.  For some months I have been struggling (reader, I cannot lie to you) to finish Naga Path, Ursula Graham Bower's account of her time spent with the Naga tribes of north-eastern India in the 1940s.  Given Ms Graham Bower went from tourist to anthropologist to guerrilla-trainer in a relatively short space of time, you might expect the book to be a thrill a minute ... but sadly I have not found this to be so.

In need of a palate-cleanser, I switched to Rebecca West's Black Lamb and Grey Falcon.  I'd heard of West before (she famously had an affair and a love child with H.G. Wells) but this is the first thing of hers I've read.
The book is a historical and travel account of Yugoslavia, which West visited in the 1930s.  Why did she decide to go to Yugoslavia?  Well, as she tells it, she was recovering from an operation and listening to the radio when she heard some disturbing news ...

So I rang for my nurse, and when she came I cried to her, 'Switch on the telephone!  I must speak to my husband at once.  A more terrible thing has happened.  The King of Yugoslavia has been assassinated.'  'Oh dear!' she replied. 'Did you know him?' 'No,' I said.  'Then why,' she asked, 'do you think it's so terrible?'

The blend of comedy, observation and premonition are irresistible.

With a memory of other royal assassinations in the Balkans triggering world wars, West made up her mind and told her husband of her plans.

In a panic I said, 'I must go back to Yugoslavia, this time next year, in the spring, for Easter.'


And so she does, husband in tow.

The book is dense, but rewarding.  Each page has a hundred references to history, geography, poetry, people - I keep having to put it down to look things up.  As a result, I'm savouring it in small bites.
Posted by Eithne at 04:36 No comments:

The Lost Art of Postcard Sending 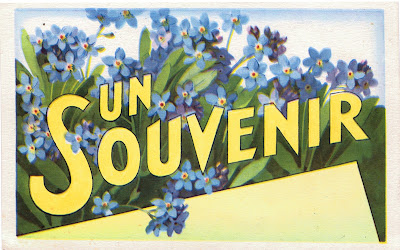 Back in December, during my Advent blogging, I posted these handy hints for postcard writing.  More recently, my sister and I agreed that is was a shame that we didn't write (and post, that's the crucial part) more postcards.  They are always lovely to receive - especially if unexpected.  Wouldn't it be great, I said, if there was a facility for printing postcards straight from your phone...  Well, ask and ye shall receive.

I'm certainly not the first person to blog about Postagram, but since it's relatively new I thought I'd mention it here.  First step is to download their app (you can also create postcards via their website if you don't have a smartphone).  You'll need to create an account and provide credit card details, but this is a once off. 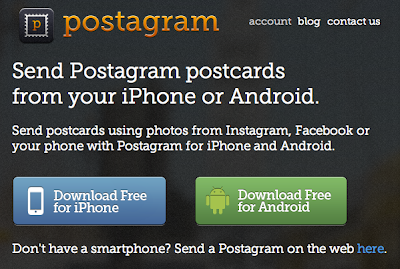 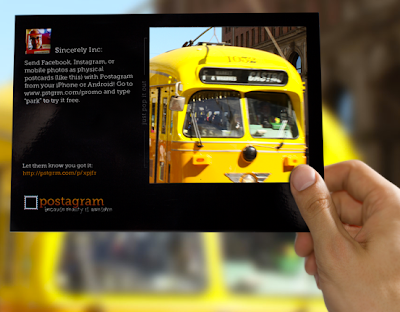 Using the app, it is super easy (takes less than a minute) to select a photo from either your phone album, your Instagram account or Facebook account to turn into a postcard.  You add a message and then input the recipient's address (you can cross-reference your phone contacts).  Then send!

What I love about it is the fact that I can choose the image I want to send, instead of having to choose from the usual cliched range of postcards available.  The other appealing part is that there's no having to remember to get stamps and post the postcard (I'm terrible at this and always return from trips with a selection of written - but unmailed - postcards at the bottom of my bag.)  The service will be less appealing to stamp collectors, since all the postcards are mailed by Postagram from the US - but for me the convenience makes up for this.

I have just sent someone a postcard with this picture - who will be the lucky recipient?  You'll just have to wait and see (and check your mailboxes.) 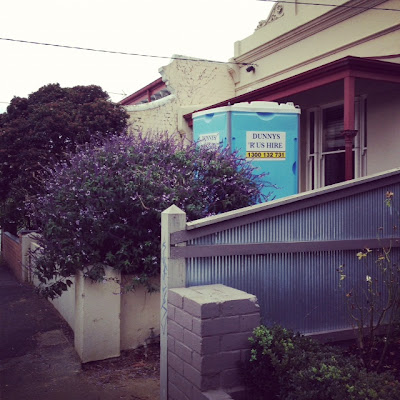 Let There Be Light

If you go exploring in Terminal 2E of Paris Charles de Gaulle airport (the terminal where all the long haul flights go from) you may just come across a nice surprise.  (Particularly welcome if you've just got off a long inter-continental flight.)

The good people of CDG have provide some light therapy booths - all free - where you can help to reset your body clock by exposing yourself to intense light. 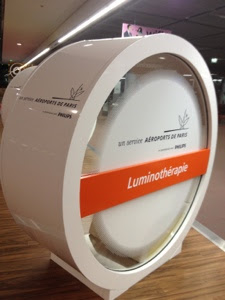 Bonus: the seats are comfy too. 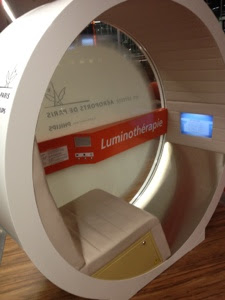 Just beside these booths of light are some strange beasts ... which on closer inspection turned out to be - not dinosaur sculptures - but oddly comfortable loungers. 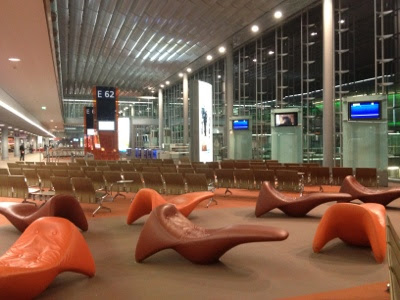 They are redesigning the terminal, but hopefully that will result in more of these gifts to weary travellers, not fewer.
Posted by Eithne at 08:36 1 comment:

Email ThisBlogThis!Share to TwitterShare to FacebookShare to Pinterest
Labels: hints, on the move

That delightful object is a fainting couch.  I have felt somewhat in need of one this past week (invent a portable version someone).  I have been hit hard, HARD, my doves, by the jet lag this trip.

Since arriving in Australia on Friday morning I seem to have spent all my time asleep, trying to get to sleep or trying not to fall asleep.  One night I slept 15 hours (= two nights' sleep = disaster).  The next night I slept 0 hours (= no night's sleep = catastrophe).

I've realised (or remembered - I think I did figure this out before) that going abruptly from summer to winter is the hardest because of the lack of daylight at your destination.

However, today is bright and sunny and I feel like I'm emerging from the fog that's enshrouded me.  More soon.
Posted by Eithne at 05:44 No comments:

Email ThisBlogThis!Share to TwitterShare to FacebookShare to Pinterest
Labels: on the move

What I Wear When I Fly

And here's what I'll be wearing - a travel outfit that's been honed and developed over the course of many, oh many, a long haul flight.

- A tank top (see last week's post on support garments.)
- A pair of black jeggings from Uniqlo, which combine great comfort (drawstring waist!) with practicality but look enough like trousers for my own comfort (I'm not huge leggings fan.)  Uniqlo.com have a good selection and very reasonable prices if you're interested in acquiring your own pair.  Black trousers are a good idea when you're going to be eating your meals out of tiny tin foil packets perched precariously on your lap.
- A sleeveless cashmere tunic with a long wool and silk cardigan over the top.  Breathable fabrics are better for comfort and lots of layers are also a good idea since the flight attendants seem to amuse themselves on long flights by playing with the temperature control.  On any flight you experience the spectrum from freezing cold to boiling hot.
- A scarf to wrap around me and double up as an extra blanket
- Cute flats which can stow away easily in the seat back 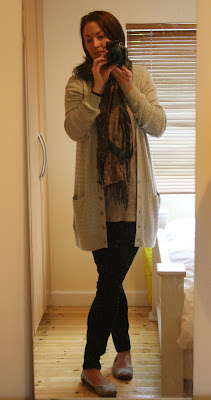