I have just come back from four days in Italy and now I have a new to-do list with just one thing on it: ITALIA.

Why oh why have I not spent more time in Italy?  It has all the things I like (food, art, style, scenery, history, great people watching) and it's not as though it were far away.  But apart from a memorable family holiday when I was five (we went to Venice, there was a gondola, I wore a hat, it was fabulous) and a brief trip to Rome a couple of years ago, my Italian adventures have been practically non-existent.      Well, that's going to have to change now, obviously.

In the spirit of making up for last time, I did try to cram a lot into the past few days, starting with four hours in Milan on Thursday with Lady Traveller's Little Sister.  (This post has been brought to you by the number 4 and the letters I and M.)  This photo of a delivery man's bike - and my sister looking admiring - sums up everything we loved about Milan. 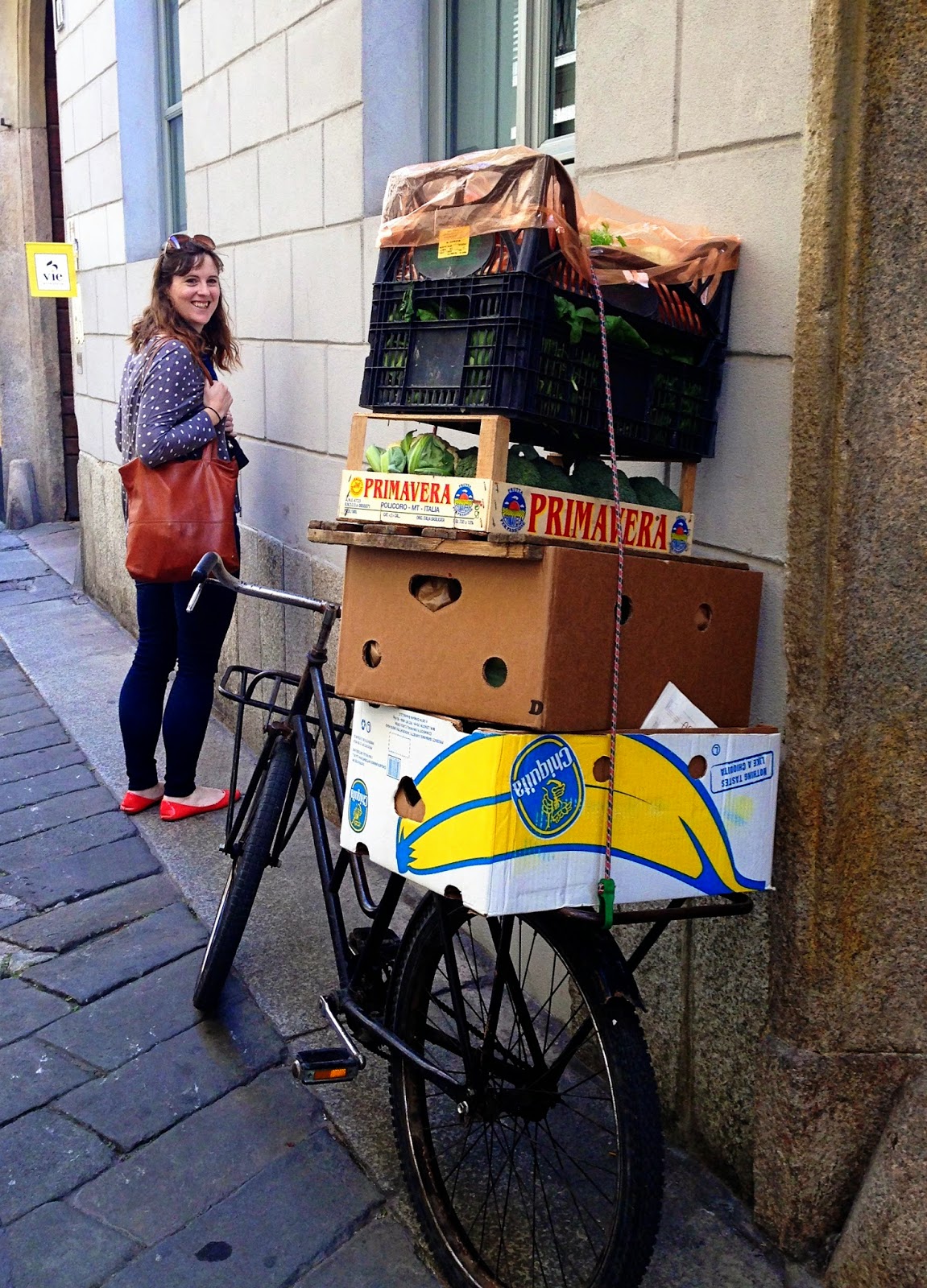 Fortified by good cappuccinos on arrival, we headed into the city and our most important appointment: lunch.  We had arranged to go to the Trattoria Milanese on Via Santa Marta, not far from the Duomo.  There are, you might not be surprised to hear, several restaurants called 'Trattoria Milanese' but this came recommended. 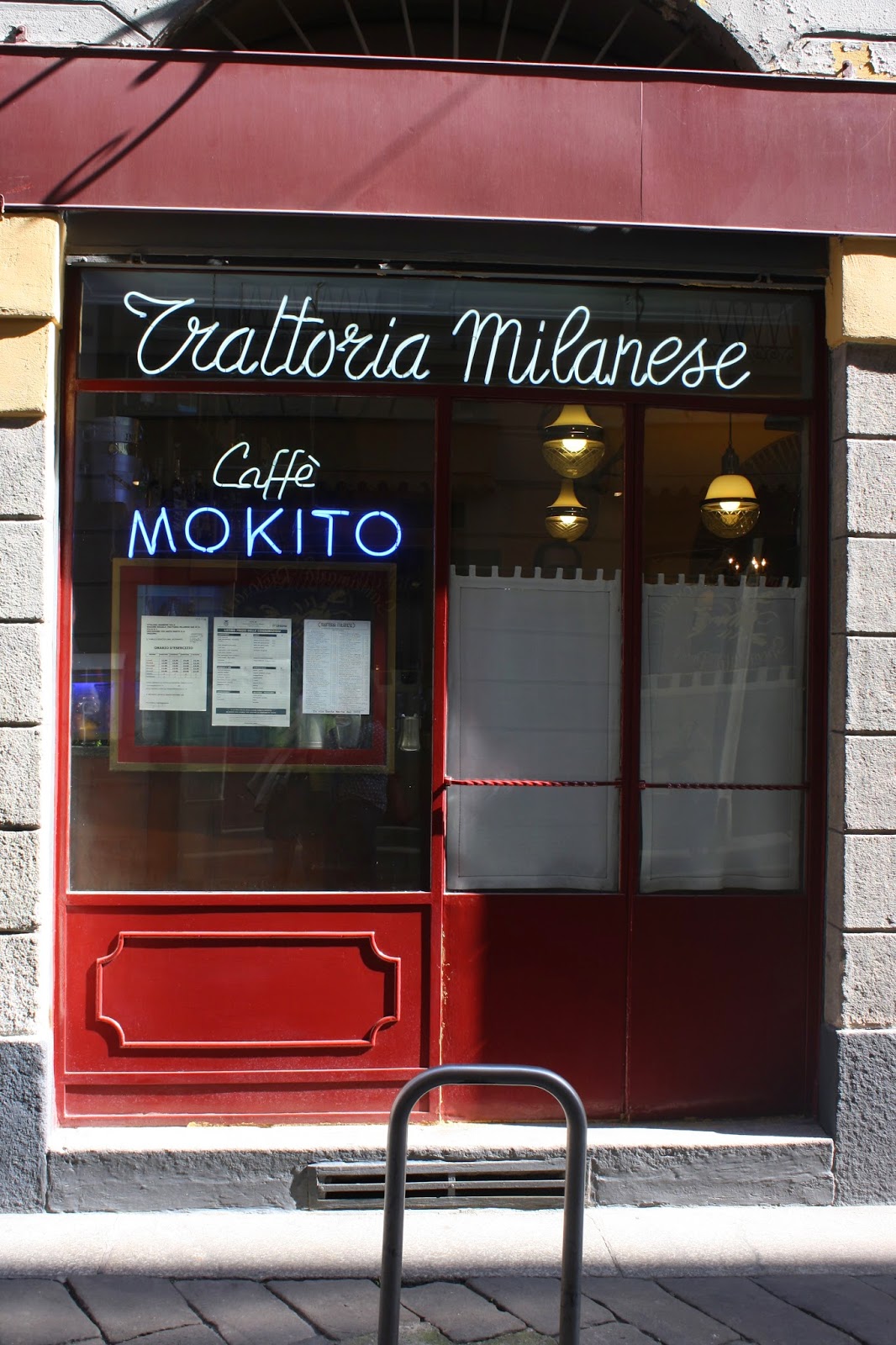 We loved it, from the paintings of dead animals on the walls, to the charming waiter, through tortellini and veal Milanese and wine and cantucci and caffe.  We staggered out and walked over to the cathedral.  Wedding cake on the outside, altogether more beautiful on the inside. 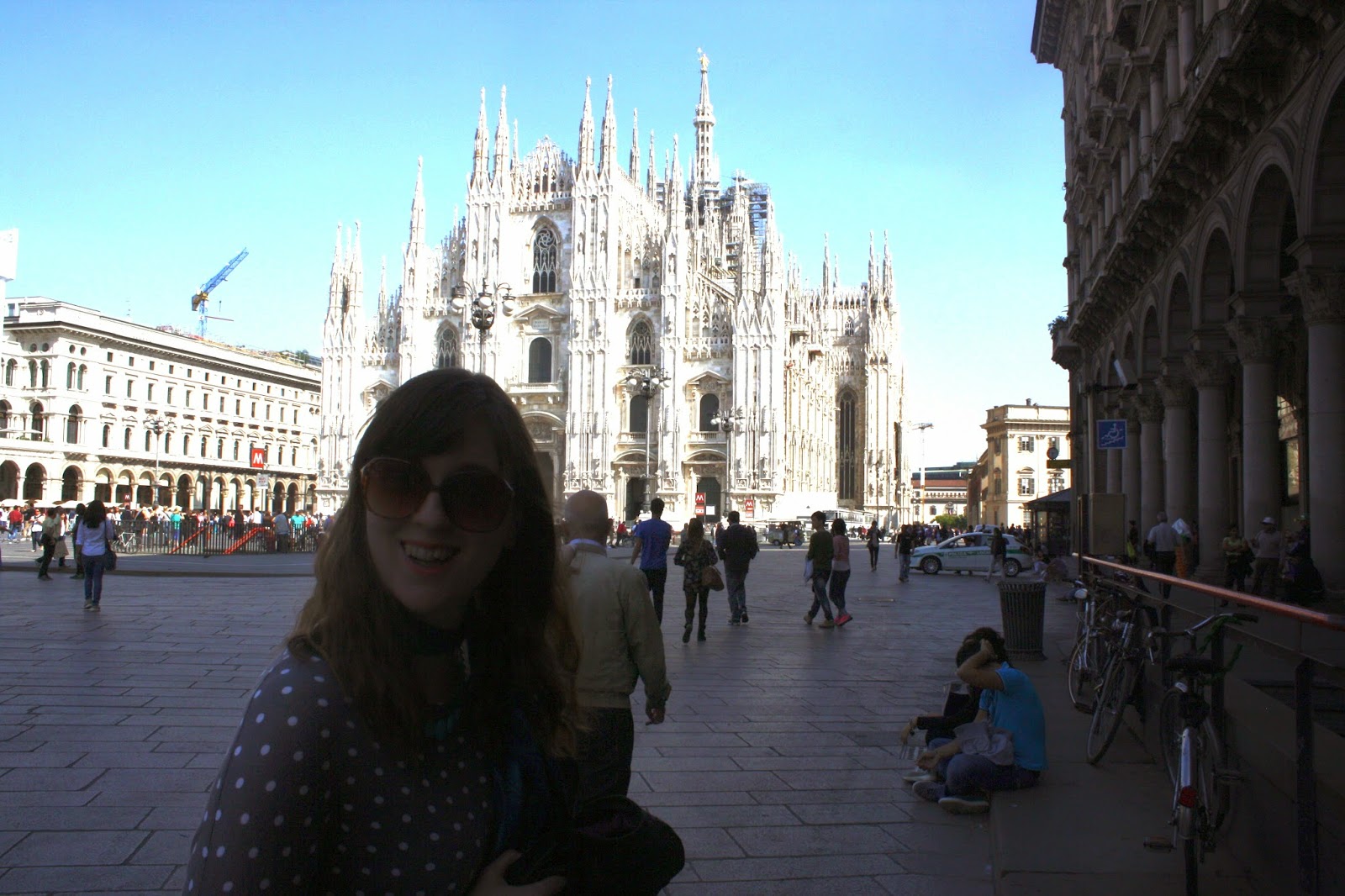 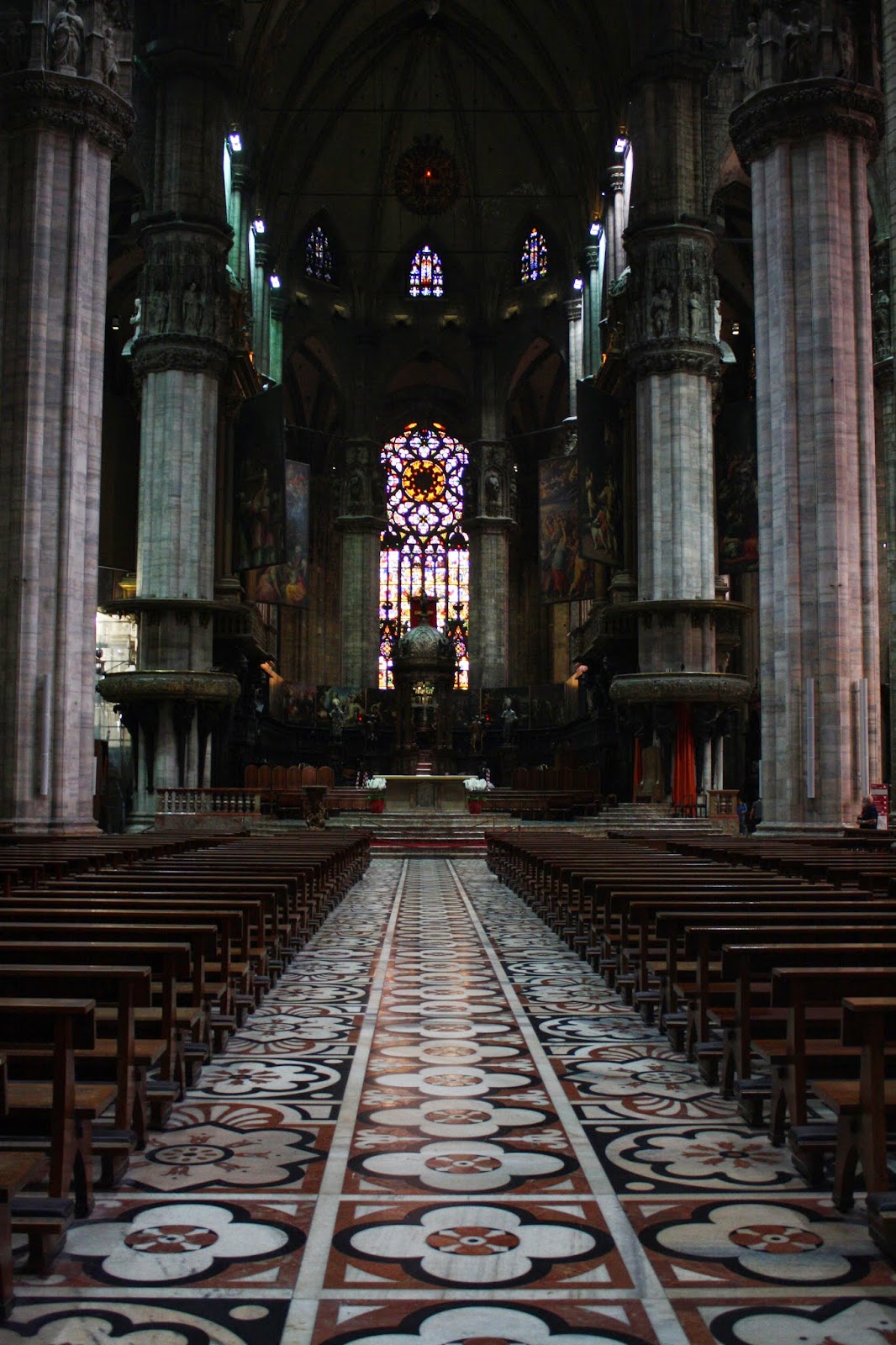 We then paid our respects in the Galleria Vittorio Emanuele - a 19th century shopping arcade - but luckily we didn't like anything we saw in the window of Versace (or Prada). 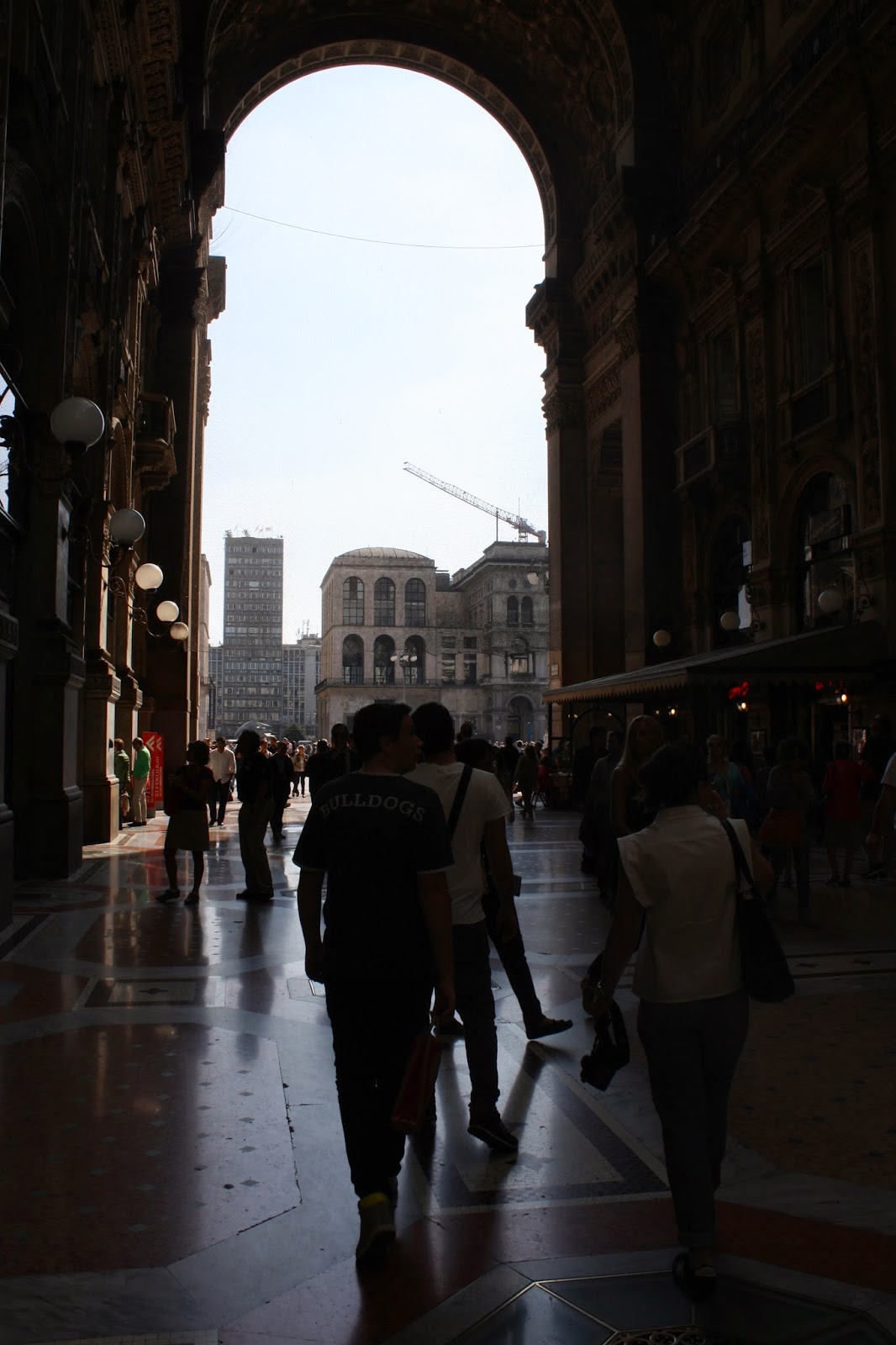 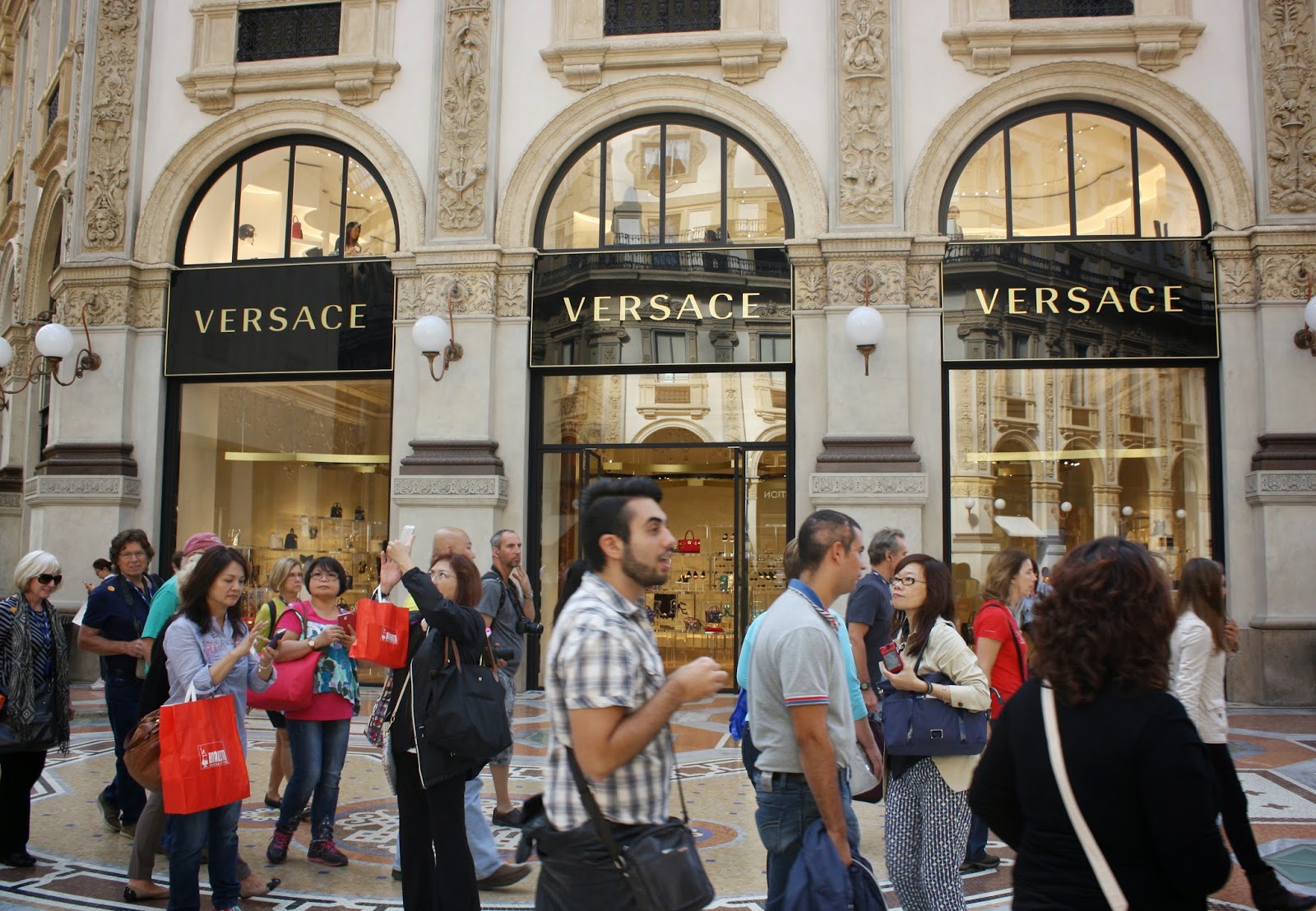 On the other side of the Galleria is the Piazza La Scala and though we didn't have time for an opera, we did have fun at the opera shop (mini opera glasses, yay!)  Funnily enough, although lots of other things in Milan are very bling, the opera house is relatively unadorned. 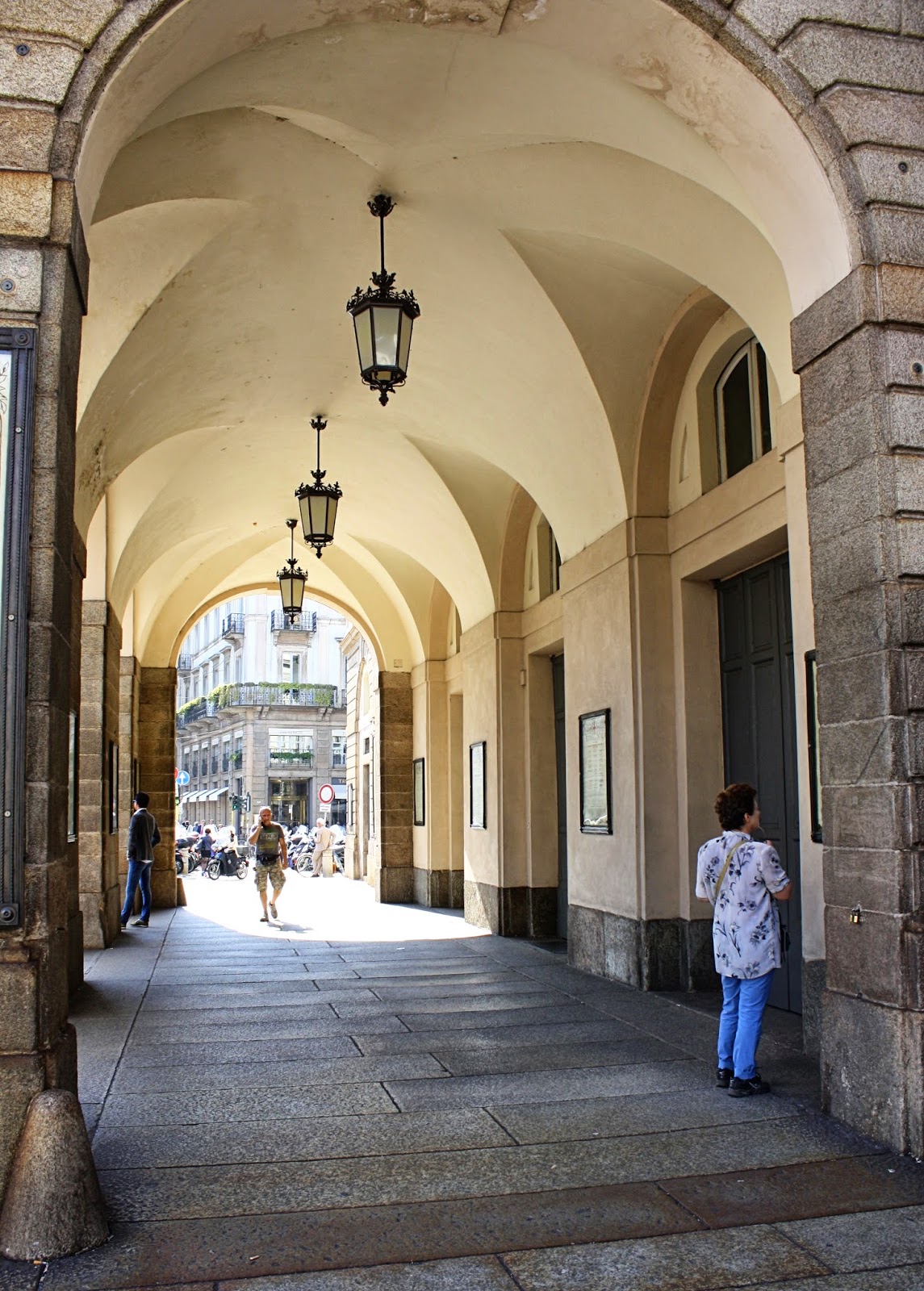 We enjoyed, very much, watching the glamorous Milanese go by, noting approvingly that the city bikes and trams were colour-coordinated. 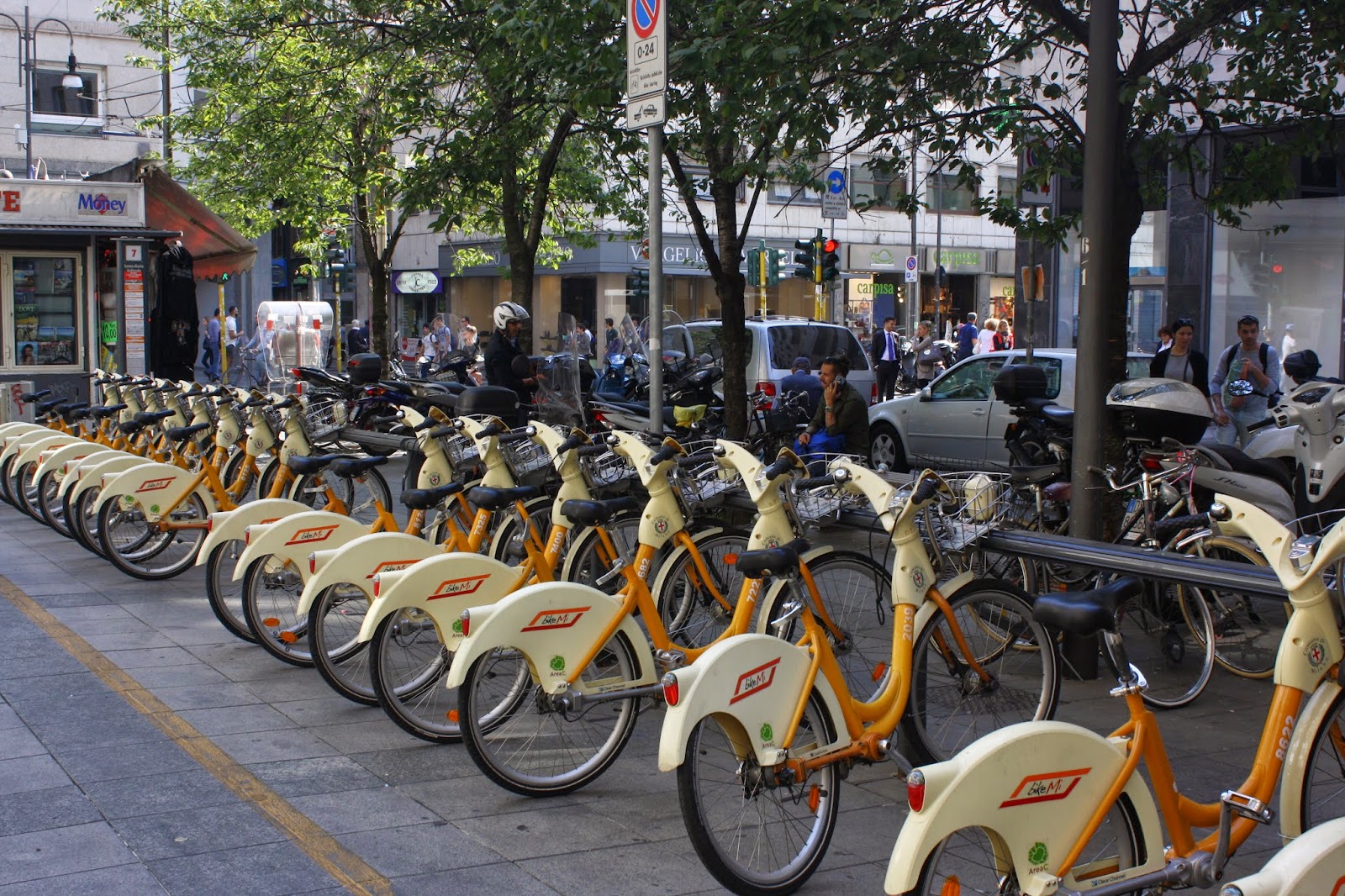 We wound up the afternoon at the very grand Stazione Centrale which has plenty of cafes, purveyors of snacks and fripperies.  And then it was time to hop on board our train to Turin. 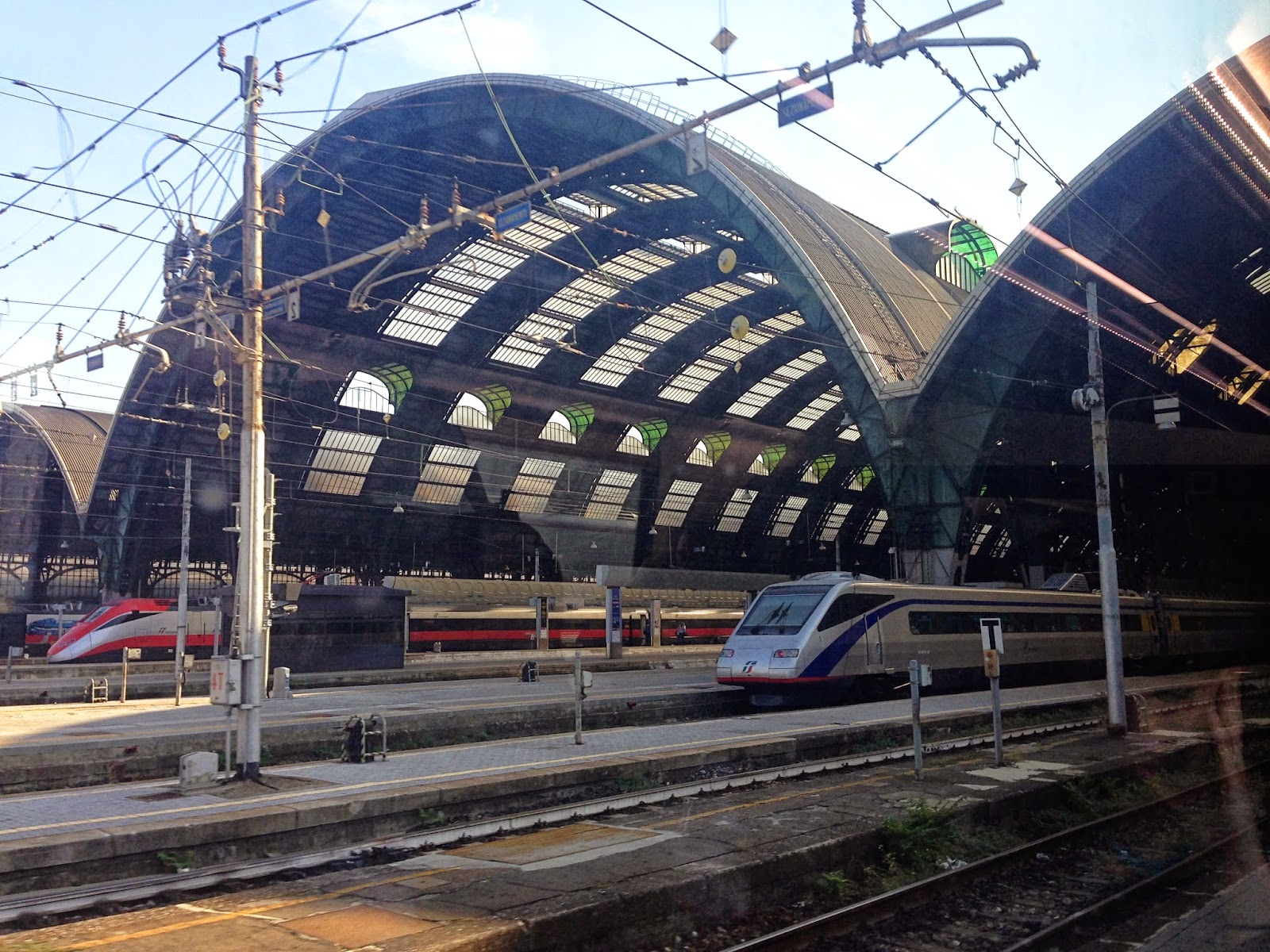 Hints to Travel Writers from a Lady Traveller 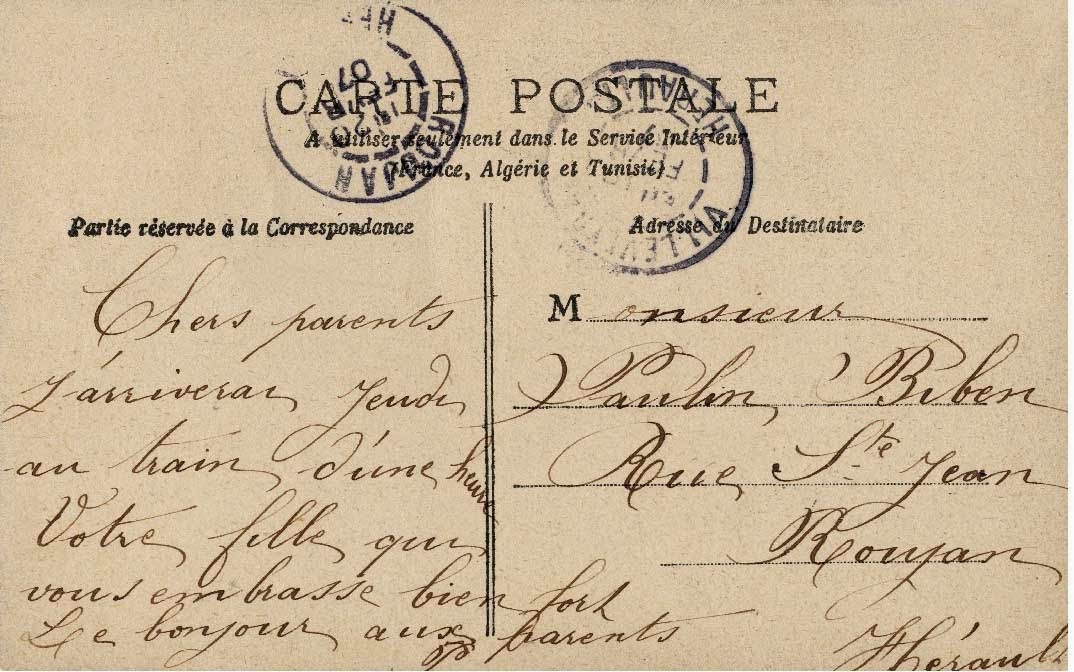 A hint today from Isabella Bird, quintessential Lady Traveller and inspiration for this blog.

'I'm convinced that actual letters - merely corrected - are the most vivid and popular form of presenting one's impressions of a country.'

Miss Bird wrote this to her publisher, John Murray, and I heard it in an episode of BBC Radio 4's 'Great Lives' (which is great, check it out).  Isabella Bird's early travel books were based on letters to her sister at home, so they have that immediate, intimate style and are - for a Victorian writer - remarkably fresh and accessible.

But this line caught my attention again because it occurred to me that blogging is really a version of what she described.  I occasionally wish my descriptions were better informed or more profound, but I started writing for family and friends and my posts reflect the true, sometimes confused, sometimes inarticulate impressions I had at the time of writing.

When this posts I will be in ITALY and will return next week with tales of pasta and wine and dolci, oh my.

Poppies at the Tower

A few weeks ago I braved the misery of a wet London day to see the poppies at the Tower of London.  A lot has been written about this elsewhere (see here and here, for example) so I won't go into detail except to say that the installation, titled Blood Swept Lands and Seas of Blood, represents every British soldier who died in the First World War.  The ceramic poppies are still being planted, but by 11th November, there will be 888,246 of them.

Even in the gloom the poppies were stunning - perhaps all the more stunning because of the gloom. 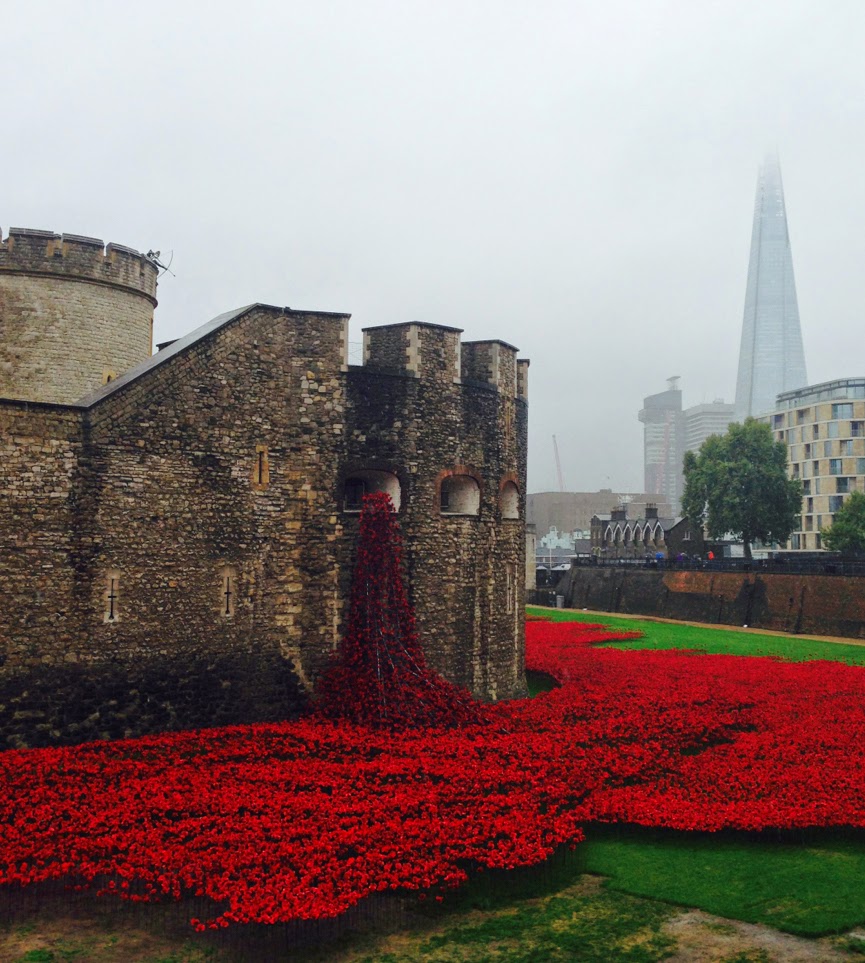 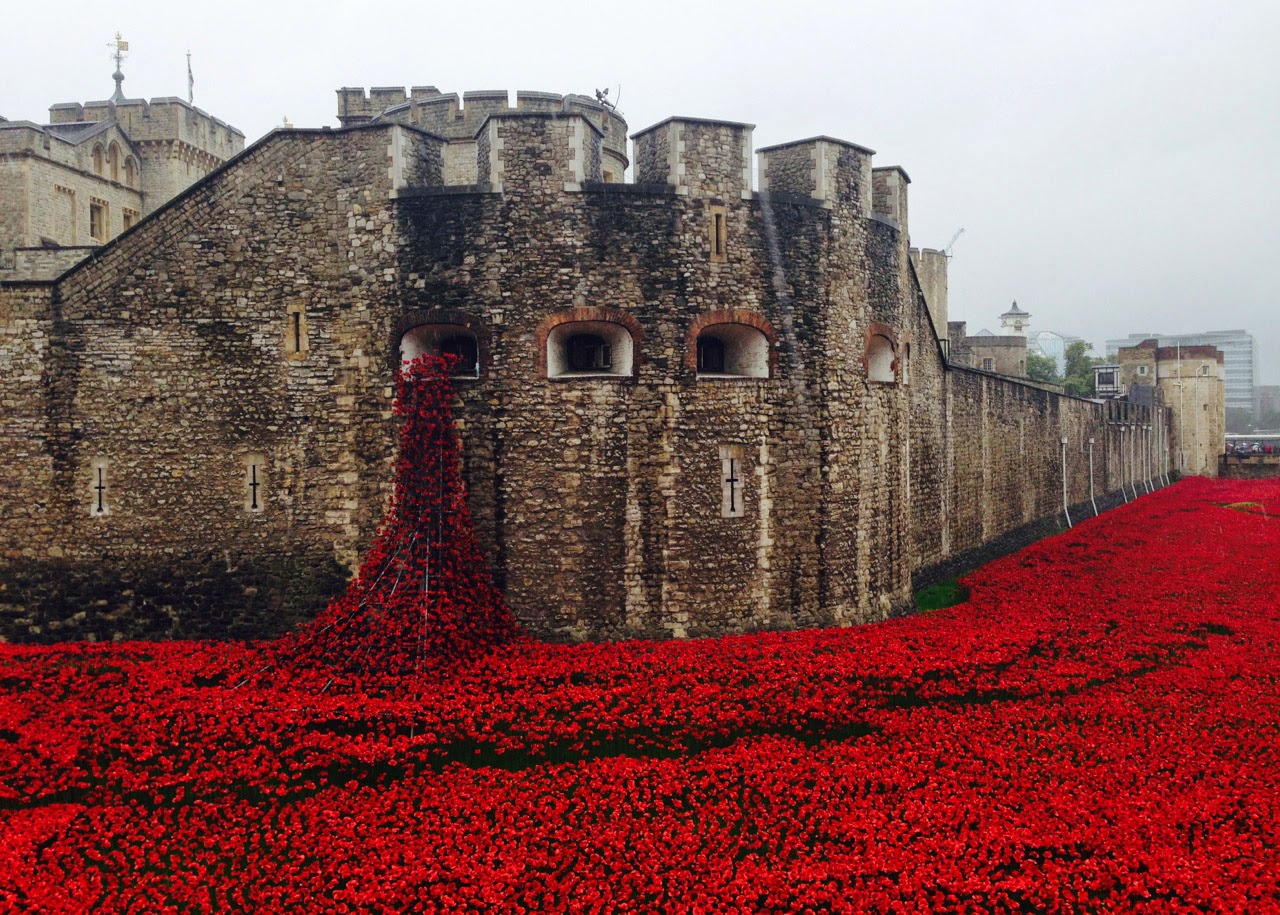 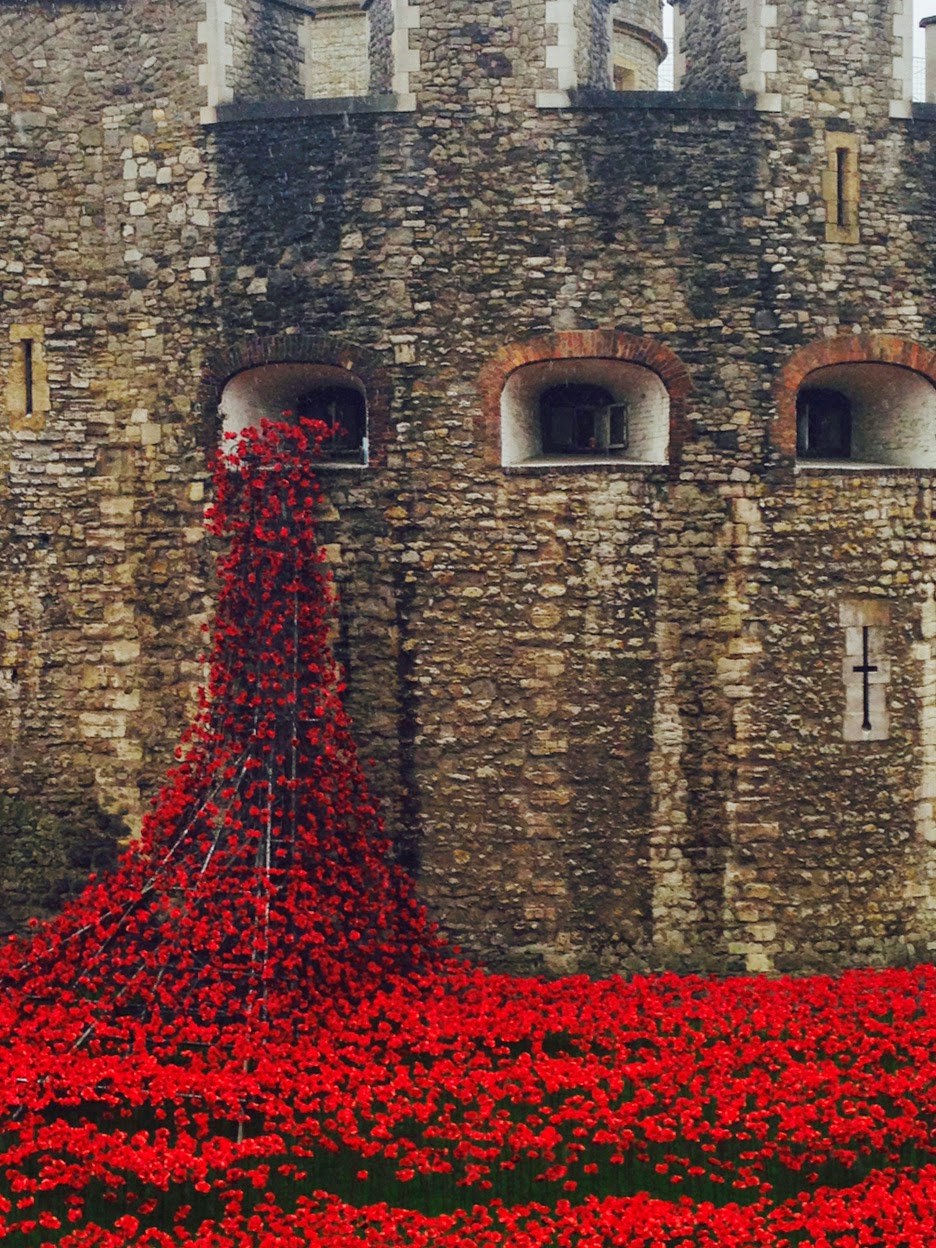 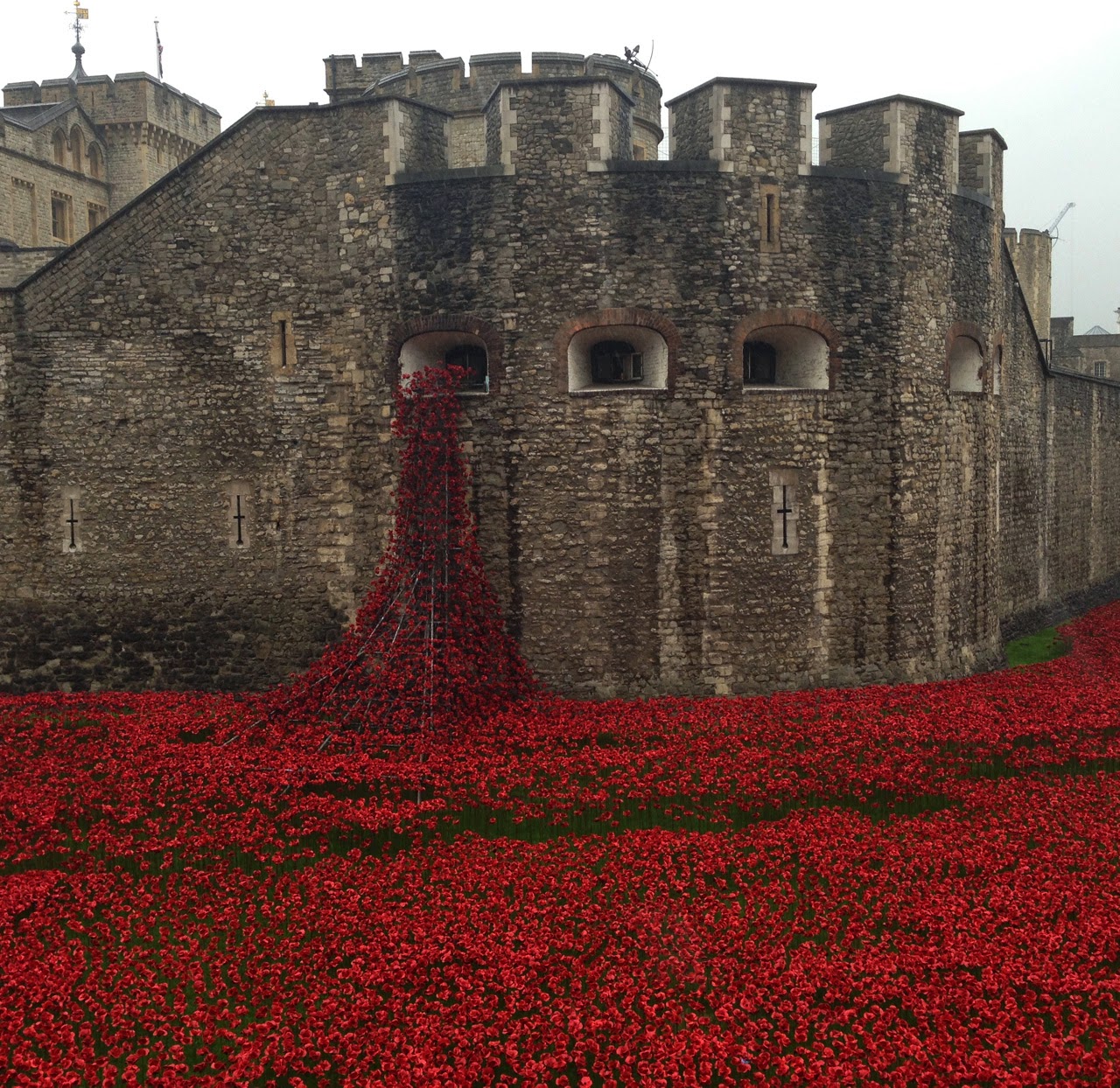 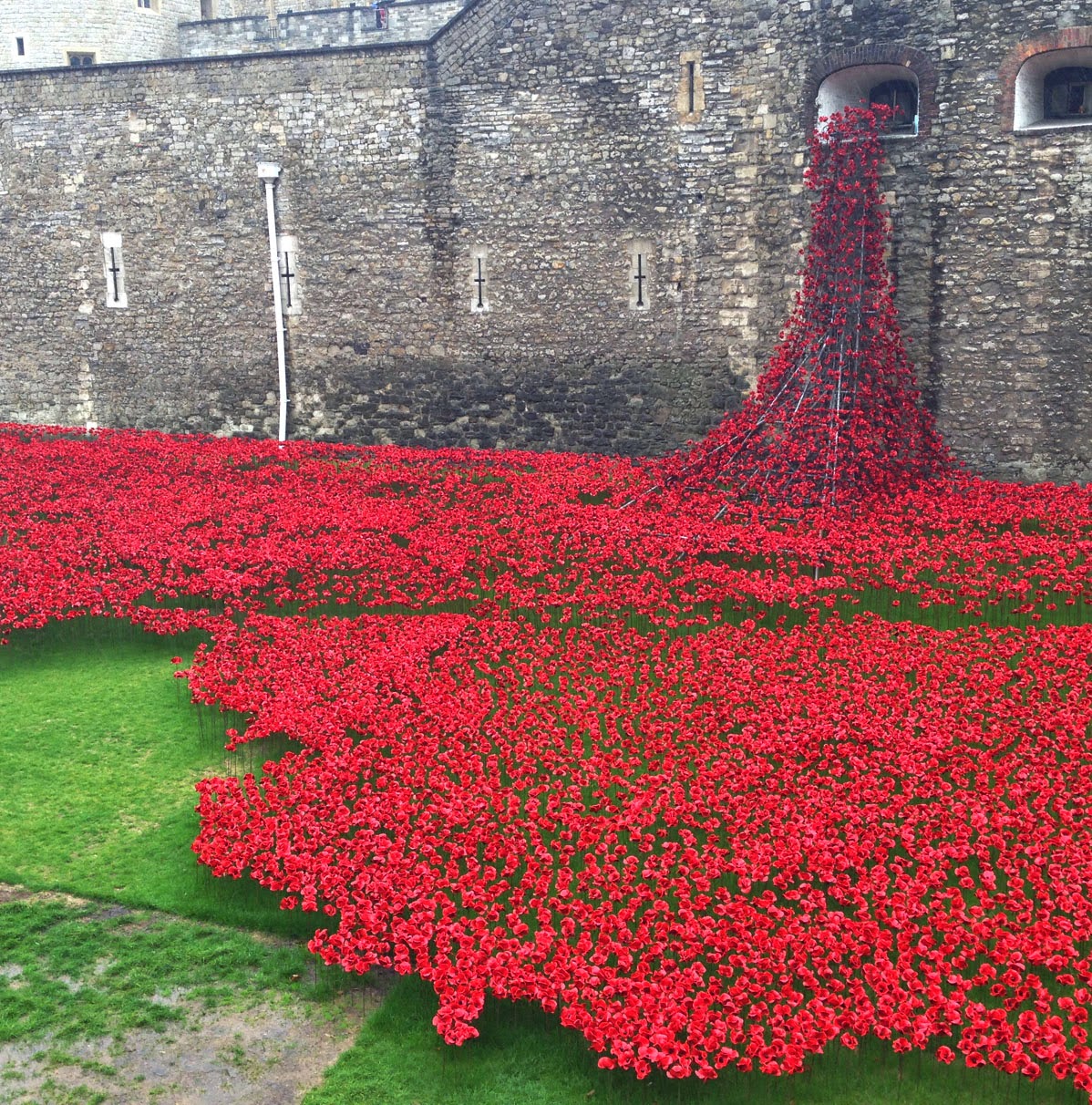 Seeing these poppies floating in the mud and the rain in the moat was a visceral reminder of the Flanders trenches.  In a simple, true, powerful way it gave me new insights into John McCrae's poem.

In Flanders fields the poppies blow
Between the crosses, row on row,
That mark our place; and in the sky
The larks, still bravely singing, fly
Scarce heard amid the guns below.

We are the Dead. Short days ago
We lived, felt dawn, saw sunset glow,
Loved and were loved, and now we lie
In Flanders fields.

Take up our quarrel with the foe:
To you from failing hands we throw
The torch; be yours to hold it high.
If ye break faith with us who die
We shall not sleep, though poppies grow
In Flanders fields.
Posted by Eithne at 09:14 No comments:

Email ThisBlogThis!Share to TwitterShare to FacebookShare to Pinterest
Labels: but seriously, England, remembrance

Returning after a short hiatus (unannounced, sorry about that) to celebrate the fact that a) this blog turns FIVE today and b) I am STILL blogging five years in, though sometimes by the skin of my teeth and, it
has to be admitted - more sporadically than I would wish.

During the hiatus I did wonder, as I have done periodically, about whether now might be the time to pack HTLT in mothballs but, as I have also decided periodically, I would miss the blog too much.  So, I will keep blogging and I am resolved to do it at least twice a week (Tuesdays and Fridays), which I am announcing here because I firmly believe the best way to keep a resolution is to tell your friends and family about it and then you'll be forced to stick to it to avoid the nagging.

There may also be a few more posts about museums since, reader, I spend many of my waking moments thinking about them and occasionally those thoughts may spill over onto the pages of HTLT. But, you know, all Lady Travellers have had their pet topics: Lillias Campbell Davidson, for example, wrote an awful lot about bicycles …

But enough about future plans.  I have decided to mark the blog's five-year anniversary with a quick look through the archives and some of my favourite posts.

The very first post, and how this blog got its name
The Cape Town Mean Face
Byron's Boot, Chopin's Piano ... Mandela's Wheelbarrow
Cramaziness - Christmas in Zimbabwe
Taking my eldest Adorable Nephew to a museum for the first time (warning: pictures are almost unbearably sweet)
Roots and Shoots
Hike4Hunger (or that time I spent a week hiking through the Australian bush)
Autumn in Fitzroy
Learning to speak Australian
One of the funniest travel books of all time
My epic trip on the Ghan
On why I commemorate ANZAC Day
Enchanted Isle
On retracing one's steps
The Sublime Porte

In honour of the occasion, there should be a hint, don't you think?  Say it with me now:
surely none is more excellent in itself and its results, than the power which has become the right of every woman who has the means to achieve it - of becoming her own unescorted and independent person, a lady traveller. 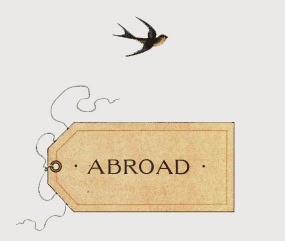